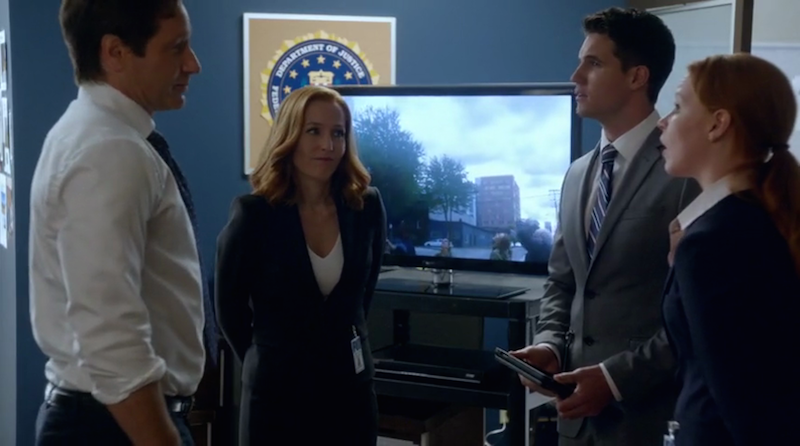 After terrorists bomb an art gallery in Texas, FBI agent Miller visits agent Mulder to ask for his assistance or advice on how to communicate with one of the bombers who is on life support. He believes the man has information on other terrorists in the same sleeper cell. Both Scully and Miller’s partner Einstein scoff at the request. Miller and Einstein leave for the airport empty handed.

Each unaware of what the other agent is doing, Scully flies to Texas to work with Miller to attempt to measure the suspect’s brainwaves as they ask him questions while Mulder convinces Einstein to administer him psychedelic mushrooms in an attempt to communicate with the man on another plane of existence.

During Mulder’s trip, he dances out of the hospital to a country music bar where he sees AD Skinner and the Lone Gunmen celebrating with him. He then has a seductive encounter with Agent Einstein before the trip sends him to a rowboat captained by the Cigarette Smoking Man wielding a whip. He sees a woman holding the terrorist.

Mulder wakes up in the hospital and Skinner tells him that he’s crossed the line and Einsten reveals she only gave him placebo pills. While walking out of the hospital, Mulder identifies the woman from his trip and brings her into the suspect’s room. Noora, Shiraz’s mother, attempts to communicate with her son via the brainwave rig Scully has set up, but Shiraz dies.

With no hope remaining to communicate with Shiraz, Mulder concentrates deeply on his trip to remember the words Shriaz muttered. With Arabic translation from Miller, Mulder is able to recall “Babylon Hotel” which is where the FBI finds the rest of the sleeper cell.